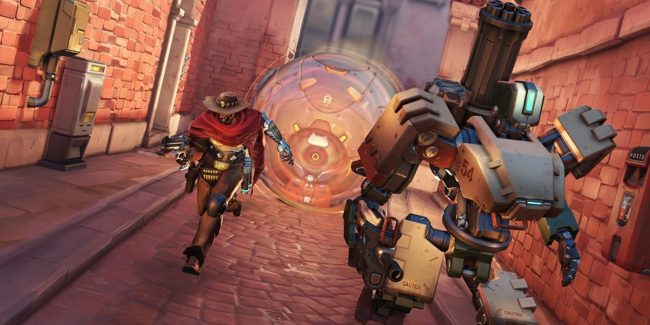 Season 25 of Competitive Play is here!

Unlocked at level 25, Competitive Play is designed for those players who want to put their skills to the test, and offers a more serious experience than our Quick Play or Arcade Modes.

Before you can kick off your competitive career, every player will be required to complete five placement matches in a selected role to obtain their seasonal skill rating for that role. Within the standard Role Queue competitive mode, players will earn separate skill ratings (SR) for each role in Competitive Play, for a total of three distinct SRs. This rating will be a number between 1 and 5000, with higher values indicating a greater skill level. Players will also be assigned a tier per role based on their rating—Bronze, Silver, Gold, Platinum, Diamond, Master, or Grandmaster – and climbing into the next tier is possible as you improve. Open Queue will utilize the same rating and tier system, but since there is no Role Queue system, you will have a separate, single SR reflective of your performance across all heroes within this game mode.

Skill ratings and tier icons will be visible at the beginning of every match. As you compete, your selected role or Open Queue skill rating will increase or decrease with each win or loss based on a number of factors, including your own performance and the skill of the other players in the match.

A detailed breakdown of the skill tiers, along with icons and information about the corresponding skill ratings can be found by pressing the “Information” button under the Competitive Play menu.

In addition to experiencing the thrill of victory, players can also unlock unique rewards through Competitive Play. Anyone who completes their placement matches in any role or Open Queue during a Competitive Season will receive a special spray and player icon.

On top of that, as you complete competitive matches, you’ll earn a currency called Competitive Points. When the season concludes, you’ll also receive a number of Competitive Points based on the highest Skill Tier you obtained during the season per role to spend on golden versions of your favorite heroes’ weapons. This also applies to your highest Skill Tier reached within the Open Queue.

The best of the best players compete across five separate Top 500 Leaderboards. Within Role Queue, one for each role, along with an additional combined average leaderboard. The combined Role Queue Top 500 Leaderboard will be based on the player’s average skill rating across all three roles. To be eligible for a role-specific leaderboard, players must complete at least 25 games in that role. To qualify for the combined Top 500 Leaderboard, players must be eligible for all three role-specific leaderboards. Open Queue will have its own Leaderboard that will require at least 50 games played within the game mode for qualification. At the end of the season, players who earn a spot within the Top 500 players for any of these leaderboards on their platform and region will receive an additional player icon and animated spray.

Season 25 is live RIGHT NOW on Windows PC, Nintendo Switch, PlayStation 4, and Xbox One, so power up your favorite gaming machine and join the fight. We’ll see you in-game!

Send this to a friend